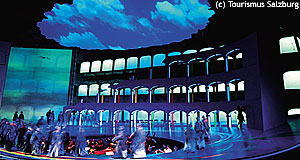 For those who like classical music, Salzburg must be heavenly: Note the birthplace and living place of Mozart (now both museums), but also current music events. The Salzburg Festival of the summer is famous and has two less-known cousins, the Easter Festival and Pentecost Festival. Note that there are constantly concerts being organised in this city, both touristy ones (often overpriced) and authentic ones (usually much cheaper, sometimes even free).

For details, see our article on concerts in Salzburg. Another interesting music festival is the Mozartwoche (Mozart Week), usually the last week of January. Salzburg lacks an opera house, but the Festival Halls and the Felsenreitschule are open for guided tours and run an concert and opera venues pretty much throughout the year. In December, for example, the traditional Salzburger Adventsingen (Advent Singing) concert takes place in the Großes Festspielhaus.

The local art university, the Mozarteum, has a focus on music, less so on fine arts - the latter ins centrally concentrated in Vienna. There is a Bach choir, a lot of tradition in performing church music, and a series of Jazz concerts done in autumn. There are several Jazz Clubs in Salzburg, by the way.

Note that Silent Night was composed in Oberndorf near Salzburg; you will find many references to that song in the city especially in December. In terms of history, note the Felsentheater in Hellbrunn - the first place outside of Italy where opera was performed. Today, the Felsentheater is a popular place for moderately legal "Goa parties".

Traces of musical heritage in Salzburg date back to the Middle Ages. In the late 14th century, the "Monk of Salzburg" wrote 100 songs of which only the text is preserved. About half of these songs were of the romantic kind, which explains why the monk chose to remain anonymous. Some historians think that the monk was in fact Prince Archbishop Pilgrim II von Puchheim. Worship and the archdiocese remained the centre for music in Salzburg later on.

In the 15th and early 16th century, the local composer Paul Hofhaimer was an important figure still being remembered in Salzburg at some places. For example in the Pfeiffergasse, where the composer of sacred music lived and died in 1537. Another prominent musical figure was Michael Haydn, less known brother of Joseph Haydn. To learn more about him, go to St. Peter - there you will find his grave in the Stiftskirche church alongside with a museum and a small concert venue.

http://en.wikipedia.org/wiki/Salzburg_Festival
Wikipedia on the Salzburg Festival