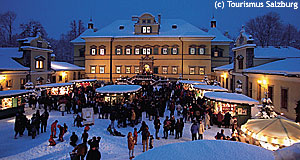 Salzburg is nice all around the year - yet every month has its specific attractions. In these "Salzburg around the year" articles, we try to highlight the most important reasons to come to Salzburg in this specific month. December finishes the year with Christmassy glory - see also the article on "Christmas Markets in Salzburg".

Weather in Salzburg in December

Mulled wine, ginger bread and handicrafts at the Christmas markets. That much about the good parts. Otherwise, December in Salzburg is cold and not that inviting. Taking global warming into account, in the past 10 years a permanent and proper "White Christmas" has become rather the exception at least in the city of Salzburg (which sits at the bottom of a valley/plain). The mountains usually do have snow - which is good, as the skiing season has started.

Average maximum temperatures of December drop to a frosty three degrees and the minimum ones to minus four. Expect frost. Lots of it. There are only two hours of sunshine on the average December day and the entire month has 12 days of rain or snowfall. Bring warm clothing, cover your head, take care to wear warm and proper shoes. Especially if you want to spend a lot of time outside - which you probably will, given the strong appeal of the Christmas markets which are open until the 23rd of December.

Things to see & do in Salzburg: December

Plenty of things to do and see in Salzburg in December - note the many Christmas markets, most importantly the one around the Salzburger Dom Cathedral and Alter Markt; the one in front of Schloss Mirabell; and the rather expensive one in the inner courtyard of the Hohensalzburg Castle. Different districts of Salzburg will have their own markets that are often less touristy than the main ones.

The second-most important thing to do in Salzburg in December is going to the "Salzburger Adventsingen", a traditional nativity scene play performed by local boys in different Salzburg dialects. It was founded by the local folk-culture-expert Tobias Reiser in 1946 and draws an audience of approximately 40,000 a year. Mostly Austrians, that is, since you won′t understand much of what′s going on unless you speak German fairly well.

In early December, certain districts of Salzburg such as Obergnigl and Maxglan hold Perchta processions that are very popular. For details on this pagan custom for which young man dress up as devil-like creatures in fur and beat the shit out of everybody they encounter, please see the respective article on "Perchta".

The 6th of December is St. Nicolas′ Day, a big deal for children who get little gifts and sweets upon the occasion. You might see men dressed as St. Nicolas on the streets; he looks more bishop-like in Austria than Santa Claus in the US. Christmas Eve is the biggest Christmas holiday in Austria, with Christmas Day and Boxing Day usually dedicated to the wider family.

New Year′s Eve on the 31st of December draws ten thousands of people to Salzburg. Grog and mulled wine huts open again after closing for Christmas and the entire city turns into an enormous party, dominated by Italians. For some reason, Salzburg seems to be a big "New-Year′s-Eve Destination" for our southern neighbours and they usually look quite happy, so we don′t expect this to change. At midnight, the City of Salzburg blows up little fortune in fireworks, to the delight of locals, Italians and other visitors alike. The main bridge, Staatsbrücke, is closed for cars and made a pedestrian zone.

Things to do & see in the surroundings: December

The skiing season is up and running, with its first peak just after Christmas. Many of the bigger ski resort towns organise Christmas markets, concerts, parties, sport events and whatever else tourists might enjoy.

The Christmas Markets of the Salzkammergut are highly popular and recommendable: The most important ones are in Mondsee, St. Gilgen and St. Wolfgang. Between the latter two, there is a boat line cruising Lake Wolfgangsee. Note that towns and markets are picturesque, traditional and would be just perfect - just expect vast crowds of people, they are hugely popular!