"The Sound of Music" Trivia Sheet 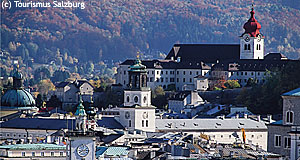 "The Sound of Music" is considered to be the second-most successful movie of all times behind "Gone with the Wind", but on contrast to the latter one, "TSoM" was taken in Salzburg and allowed those Salzburgians with a business-mindset to grow a major industry on the soil of the musical.

There is a lot of silly stuff told about "The Sound of Music" and since it got a somewhat legendary status in the history of Hollywood, plenty of funny little facts and stories are around. Tour guides in Salzburg might add their own interpretation of them. Here is a short outline of "The Sound of Music" trivia that we found interesting:

6 Little Facts about "The Sound of Music"

1.) The song "I have confidence" was written by Rodgers as a "bridge" for the gap between Maria′s departure from the convent and her arrival at the Trapp Villa. There is one scene whilst Maria is singing in which she passes an archway. This is where you can see the real Maria, one of her daughters and one of her granddaughters starting to cross the road. The Trapps had arrived that day on the set and the director Wise offered them this walk-on role.

2.) In one scene, Julie Andrews tripped during filming. The editors decided to leave the scene in the movie, because it seemed to fit the character of Maria very well as it was.

3.) Many people all over the World believe that "Edelweiss" is an Austrian folk song or even the national anthem. In fact, it was written by Oscar Hammerstein and is hardly known in Austria. This is not the only cultural confusion that one can find in "The Sound of Music" being a critical Austrian.

The Salzburg Festival, in "real life" one of the World′s best classical music, drama and opera festivals, is portrayed to be a non-professional′s folk music competition. The "Ländler" dance that Maria and Kapitän von Trapp perform in the movie actually exists, but is done completely different in Austria.

4.) Maria was never a nun. She wasn′t a novice either. In fact, she was more or less an "internee" in the most basic level of monastic admission, just evaluating whether or not the life as a nun would be suitable for her. Maria′s foster parents raised her actually as socialist without much religious affiliation. Later on, Maria became increasingly religious whilst she studied to become a teacher.

5.) Apparently it is true that Georg von Trapp had trained his children to respond to specific pitches when he blew a whistle. However, he did not call Maria in as a governess, but as a teacher for his second-oldest daughter. She was ill and had to be home-schooled. Her name was also Maria, but changed for the movie-role to avoid confusion. To make things worse: Liesl is - at least in real life - a man named Rupert ("I am masculine, going on feminine…").

6.) The Trapp family did indeed have to flee from the Nazis. However, they had stayed in Salzburg together for quite a while, Maria and Captain von Trapp had got married in 1927, Austria was incorporated into Nazi Germany in 1938. When they left Austria, they pretended to attend a hiking trip and took a train to Italy. In the movie, they hike to Switzerland, excellently played by Untersberg Mountain, which is actually about 300 kilometres away from Salzburg.