Guide to "The Sound of Music" locations:
Your self-guided "Sound-of-Music-Tour" 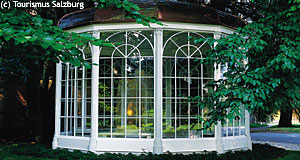 Where can you follow the traces of "The Sound of Music" when you are in Salzburg? Several tour operators organised group excursions to some of the places where the movie was taken, but if you prefer to stroll a bit, here are the major scenes:

1.) Nonnberg Nunnery: Early scenes, when the nuns sing "Maria". Mind that most of the scenes were actually taken in the studio in California.

2.) Mirabell Castle and Mirabell Gardens: Another must for "The Sound of Music" fans; the place where Maria and the Trapp children sing "Do-Re-Mi" and run through the hedge tunnel.

3.) Residenzplatz Square and Fountain: Maria crossed the square by bus on the way to the Trapp villa, leaving the convent and singing "I have confidence in me".

4.) Felsenreitschule and Festival Halls: This is the stage on which the Trapps perform during the Salzburg Festival and Georg von Trapp sings "Edelweiss".

5.) Leopoldskron Castle: The façade facing the lake served as one of the views on the house of the Trapp family.

6.) "The Sound of Music" - Pavilion: You will find the pavilion in the Park of Hellbrunn Castle, but during the filming, it was in the gardens of Leopoldskron Castle. It was the place where Liesl sings her famous "I am 16 going to 17".

7.) Frohnburg Castle: The court and front façade facing Hellbrunner Allee served for other views on the house of the Trapp family, for example, when Maria just arrives at the villa.

8.) Most tour guides will tell you that the cemetery scenes when the Nazis chase after the Trapp family was filmed at St. Peter′s Abbey - but that′s a bloody lie! Don′t believe them a word, the scenes were shot indoors in the US.

Other scenes were taken outside or in the outskirts of Salzburg, at places like Schloss Anif Castle, the Burg Hohenwerfen Fortress, Lake Mondsee, Lake Fuschl, St. Gilgen and St. Wolfgang. The "real" Trapp Villa also exists, though it did not feature in the movie and we haven′t figured out where it is yet.