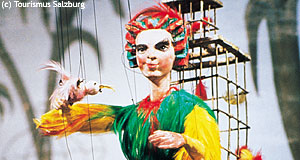 The Salzburger Marionettentheater (Theatre of Marionettes) is a traditional institution that provided inspiration for the musical "The Sound of Music". When the movie was shot in Salzburg, the lonely shepherd song was recorded with the appearance of Marionettes - the ultimate base for the international fame of the marionettes. Within Salzburg, a local marionette tradition can be tracked back much further in time.

The artist Anton Aicher was a local that performed Mozart operas with marionettes ever since 1913. The first production of the Salzburg Marionette ensemble was "Bastien and Bastienne" and a great success. Back then, tourism has already started to develop and the marionette plays were a welcome supplement to the "usual" Salzburg attractions.

Formation of the Theatre of Marionettes

In the years that followed, the repertoire of the Salzburg Marionette ensemble was continuously extended and started to include children as a target audience. This proved to be a rather successful strategy and until 1950, the Salzburg Marionette theatre staged (even though it still lacked a permanent stage) an impressive 130 productions.

The most shaping period of the ensemble was in the 1920ies, the climax of cultural life in Salzburg: The Salzburg Festival was founded and the city became internationally famous as a holiday destination. At this time, the Salzburg Marionettes had their first international tours. Following WWII, tourism quickly recovered and supported the battered city in its efforts to re-built the former glory. The Salzburg Marionette productions were one of the first attractions to re-open.

A new Theatre for Salzburg's Marionettes

1971 brought a turning point in the history of the marionette tradition in Salzburg: Following the appearance in and phenomenal success of "The Sound of Music", the ensemble finally got its own, permanent stage - the Salzburg Marionette Theatre was born. The new theatre was created between Mozarteum and Landestheater, which is where it can still be found. The small theatre with 350 seats was modelled after a Baroque stage. Today, the Salzburger Marionettentheater is well-known for high-quality opera productions. It is not an attraction primarily for children, even though it is likely to appeal to them.

Most productions are operas by Wolfgang Amadeus Mozart and the skilfully made costumes and stage settings are famous in all of the Marionette aficionado world. In 2007, the consumerist fall of the Salzburg marionettes came - the theatre included a version of "The Sound of Music" in its repertoire. Given that the movie is almost unknown to most Austrians, this shows that the target audience has gone from adult opera fans to children to foreign tourists. That being said, the quality of the performances is high and we can warmly recommend a visit - especially on a rainy day.

http://de.wikipedia.org/wiki/Salzburger_Marionettentheater
German Wikipedia on the Marionette Theatre of Salzburg