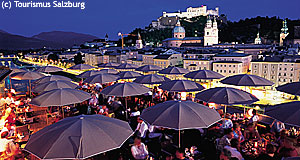 Salzburg is nice all around the year - yet every month has its specific attractions. In these "Salzburg around the year" articles, we try to highlight the most important reasons to come to Salzburg in this specific month. July is among the hottest months in Salzburg.

Weather in Salzburg in July

July is proper summer: Swimming in the lakes of Salzburg is common, people from the city start to flea to the mountains to escape from the heat at least on weekends. Daily maximum temperature goes to 23 degrees Celsius on average, minimum ones rise to 13 degrees. Note that these numbers refer to averages - and include cool and rainy days.

There are also properly hot days to be expected in July, with often over 30 degrees. Expect seven hours of sunshine per average day and 14 days with rainfalls. Bring light, summerly clothing and a pullover or light jacket for longer evenings in the beer gardens or in the mountains. Bring a light rain jacket, too.

Things to see & do in Salzburg: July

In the second half of July, the annual golden time of Salzburg begins: The Salzburg Festival opens its gates, traditionally with a performance of the Medieval-style play of Jedermann. Ever since 1926, the Salzburg Festival transforms the city into a gigantic high-key culture machine, with very fine opera, concerts and theatre on every corner. The rich and beautiful from all over the World, but mostly from Central Europe gather in the city, which has many side-effects to daily life in Salzburg.

Things to do & see in the surroundings: July

The 25th of July is St. Jacob′s Day, the patron saint of shepherds. For obvious reasons, St. Jacob is honoured particularly much in St. Jakob am Thurn (Salzburg). This is done with traditional dance ceremonies. Another tradition is a wrestling competition on the mountaintop of Mount Hundsstein (at 2,117 metrs altitude). This competition was done ever since the Middle Ages. The winner earns the title "Hagmoar" and the acknowledgement of the other males of the village.

On Mount Dürrnberg near Hallein (the town with the famous salt mines), the historic miners′ guild performs the ancient "Schwerttanz" or "Sword Dance". In fact, today it is the employees of the company that maintains the mine for tourists, but the dance itself is still performed in traditional miner′s costumes. There are other Salzburg communities in the South of the province with similar customs (for example Böckstein).

In Muhr and Zederhaus (Lungau region in the south), so-called "Prangstangen" poles are carried around in a ceremonial fashion in Zederhaus and Muhr in July. These long poles are decorated with thousands of flowers. According to legend, the origin of this custom is contained in an oath that the villagers swore: if they were to be spared from a grasshopper pest, they promised to carry decorated flower poles around. They were, and so they still make there Prangstangen every year until today.

Building the Prangstangen takes several weeks and involves up to 50,000 flowers (including daffodils, daisies and Enzian) - for every single pole. They are carried by unmarried young men of the village. The Prangstangen are then placed in the church until the festival of Maria Himmelfahrt on the 15th of August. After that, the flowers are burnt and used to smoke food.