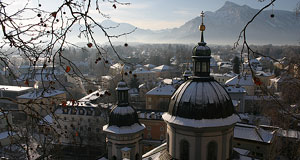 Salzburg is nice all around the year - yet every month has its specific attractions. In these "Salzburg around the year" articles, we try to highlight the most important reasons to come to Salzburg in this specific month. February makes part two of the feature.

Weather in Salzburg in February

Just like in the previous month, Salzburg is extremely cold in February. Visitors can expect temperatures below zero at almost any point - even though the average daily minimum temperature rises to minus three and the maximum even to five degrees Celsius. One hour of sunshine per day is gained in comparison to January: Sunny February treats you with in an impressive three hours of sun per day on average. Expect snowfalls on 10 days. To sum it up: Bring warm clothes, dress in layers and take care to wear warm and comfortable shoes.

Things to see & do in Salzburg: February

February is probably the least touristy month in the year - alongside with November. Accordingly, things to do for tourists are rather sparse. The ball season reaches its peak, and Salzburg′s ball scene is said to rival that of Vienna. Many balls are held by societies, guilds and associations, others - the more formal ones - are held by dancing schools or academic institutions. It wouldn′t be Salzburg if there wasn′t also a ball done for people wearing traditional costume. With Ash Wednesday, lent begins; try the traditionally made lent beer (Osterbock) at breweries such as the Müllner Bräu.

A tradition worth seeing (and hearing) is the Aperschnalzen, held in Wals just outside of Salzburg (accessible by city bus): Young men in traditional costume gather with horse whips and whip them in a rather noisy manner. Historically, they did so to awaken the spirits of nature from their winterly sleep - one of many pagan customs in the Salzburg area that have survived until today.

Things to do & see in the surroundings: February

Parties and events for the carnival season dominate activities in the surroundings of Salzburg. Rural communities hold events such as Faschingssitzungen, Gschnas and balls that are more about drinking and cheering rather than formal balls such as those of Salzburg. The skiing season is up and running at its peaks with school holidays in Austria fuelling the skiing industry throughout February. All Fasching (Carnival) events peak at Mardi Gras (Faschingsdienstag) and end with Ash Wednesday, which marks the onset of lent.