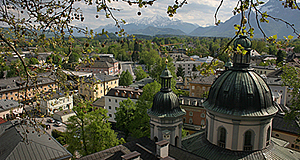 Salzburg is nice all around the year - yet every month has its specific attractions. In these "Salzburg around the year" articles, we try to highlight the most important reasons to come to Salzburg in this specific month. In June, summer takes over in Salzburg.

Weather in Salzburg in June

The tourist season kicks in: Salzburg in June is a bundle of joy with warm, sunny weather - and the usual rainfall that the city is famous for. The maximum daily temperature goes to 22 degrees Celsius, the minimum comes to 11 degrees. Salzburg becomes generally nice and pleasant, but not too hot in June. Expect seven hours of sunshine on an average day, as well as 14 days with rainfall. Bring light clothing as well as a light jacket - the latter one ideally waterproof.

Things to see & do in Salzburg: June

June is proper summer: All tourist attractions are fully open now and even the most touristy ones (usually "Sound of Music"-related) that no local would ever care about are running smoothly. For a less touristy, but highly cultural event, enjoy the Chorfestival in Salzburg. This is a series of choral music concerts, dedicated to Johann Sebastian Bach and Baroque music. The Altstadt of Salzburg with its numerous Baroque churches serves as the ideal venue for such occasions.

Things to do & see in the surroundings: June

The second Thursday after Pentecost is "Fronleichnam" (Corpus Christi). Upon this occasions, all parishes organise processions for which many associations and societies of the respective village join in their uniforms/costumes/symbols. This is primarily a religious event and not held for tourists, so behave respectfully and keep a distance if you are not Catholic and don′t want to participate in the procession itself. Nevertheless, you will certainly be welcome to talk to people and take pictures around the event.

A special custom highly unusual even by Austrian mountain standards are the Samson processions in the Southern district of the Lungau: In several villages (most importantly, Tamsweg, St. Michael, Muhr and Ramingstein), giant figures of a Roman soldier are carried around. They are usually complimented by the young people of the village in some sort of traditional costume. The origin of the custom - which can be tracked back to the early 17th century - is unclear; scholars assume that it is linked with pagan rituals. In any case, for tourists the Samson processions justify a trip to the Lungau. Request details at the local tourist information centre.

On the 21st of June, it is equinox, another big day for Germanic paganism. In Western Austria, bonfires are lit on hill- and mountaintops. They are often supplemented with beer tents and parties; in our post-pagan days, these events are usually organised by Catholic youth organisations, even though you might find the odd anti-Clerical, nationalist fraternity celebrating its highest holiday of the year.