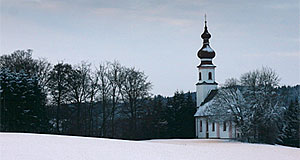 Köstendorf is a village in the Flachgau region of Salzburg. It has a population of approximately 2,500 and is situated by Lake Wallersee, the biggest lake in the Salzburger Seenland (Salzburg Lake District). Köstendorf was first mentioned in a document dating back to the late 8th century; it became an independent municipality in 1848.

Like most of the Flachgau villages, Köstendorf grew tremendously in recent decades, correlating with the economic boom of Salzburg since the end of WWII. Köstendorf has access to the railway, trains to Salzburg take approximately 22 minutes. This and fairly good roads make Köstendorf suitable for commuting, even though neighbouring Neumarkt also provides employment opportunities.

In terms of sightseeing, Köstendorf does not have an awful lot to offer. The Wenger Moor is shared with Neumarkt, a swamp by Lake Wallersee. It is a Natura 2000 area of the European Union and an important recreational area for locals. There is a very nice lido by the lake that can be accessed from Salzburg with local trains, just get off the stop "Wallersee".

It is run by the province of Salzburg, entrance is free of charge. Köstendorf also has some nice inns on hilltops from where you can oversee the gentle ice age landscape of the northern Flachgau. A town museum (Heimatmuseum) will tell you more about the history of Köstendorf; note also the little Baroque church of Tödtleinsdorf and the hiking path through the Tiefsteinklamm.