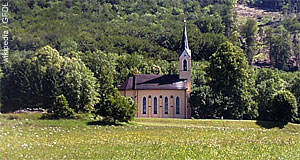 Koppl is a village in the Flachgau area of Salzburg with a population of approximately 3,000 residents. It borders to the city of Salzburg, but bends around the Gaisberg. This means that Koppl is actually less "tied" to Salzburg than one would assume from simply looking at the distance.

Nevertheless, Koppl has become an effective suburb of Salzburg, with the typical side-effects: Death of village features, a worsening of the infrastructure and an increase in the residential character of the community. In Koppl, you can also find the Salzburgring, once a Formula 2 racing course which is now used for low-key sports events, concerts and other events.

As Koppl follows the base of the Gaisberg, it is divided into several hamlets or areas that often had their own historic focal points. This is particularly striking at the remote hamlet of Guggenthal, which formed around a large agricultural holding that dated back to the 13th century. In the late 19th century, a historicist factory building was erected here. Guggenthal became part of Koppl only in 1935.

International visitors are unlikely to go to Koppl. It offers little in terms of sightseeing, but plenty of nature and hiking opportunities. Note for example the Nockstein, a cliff that branches out of the Gaisberg. Or the Koppler Moor, a swamp that was almost finished off by drainages in the 19th century; only relatively recent environmental protection measures have preserved still extensive remains of the swamp.