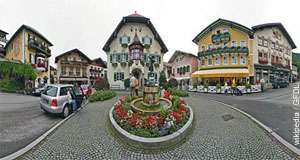 St. Gilgen is a small town in the Salzkammergut, more specifically in the Salzburg part of it. Politically, it is part of the Flachgau. St. Gilgen is famous for its scenery, the historic town centre and the access to Lake Wolfgangsee. It is very popular among international tourists, who come to St. Gilgen preferably on day-trips during the summer season and in the winter, when there is a famous Christmas Market in the town.

There are boats touring the Wolfgangsee and connecting the communities of St. Gilgen, Strobl and St. Wolfgang. Especially the cruise between St. Wolfgang and St. Gilgen is hugely popular with overseas tourists - and indeed, it offers views on some of the most attractive spots of the Salzkammergut area. Another highlight of the area is the cable car up the Zwölferhorn. You can get on that one from St. Wolfgang, even though in terms of official boundaries, the base of the cable car is in St. Gilgen.

Hiking in & around St. Gilgen

The outskirts of St. Gilgen are not very attractive; housing developments from after WWII comprised mostly of hotels, more hotels and holiday homes. During the main season, tourists clearly outnumber the 3,500-ish residents of St. Gilgen. Attractions of St. Gilgen beyond the general appeal of the city include the Kirche Falkenstein, a small church of pilgrimage; the Schafbergbahn, a railway up the Schafberg mountain (famous for featuring in "The Sound of Music") and a 19th century Imperial Naval Academy, clearly visible from the boats if you opt for a cruise.

Hiking from St. Gilgen to the Falkenstein is very rewarding; on this route, you will notice two crosses on little islands. One is called Ochsenkreuz (oxen cross): According to legend, a farmer crossed the frozen lake with his oxen; the ice broke and the farmer was close to drowning. However, the oxen rescued the man in a Flipper-like manner and out of grace, he endowed the erection of the Ochesenkeuz.

The other cross is the more famous Hochzeitskreuz (wedding cross) which - according to legend - commemorates a wedding party that celebrated on the ice in the 16th century. Here, too, the ice broke and all guests died; only bride and groom got safely to the shore. They later donated money for the erection of the cross. By the way, the former chancellor of Germany, Helmut Kohl, spent his vacations in St. Gilgen for many years.

Hotels in St.Gilgen am Wolfgangsee